Posted by Edward Nuber, Director of Marketing, ECRI on Feb 11, 2022 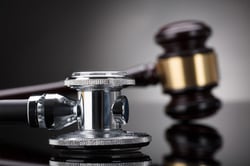 Roughly 20,000 malpractice claims are filed annually in the U.S. alone, and half of all physicians will be sued sometime during the course of a career. During the pandemic, lower numbers of claims were reported from some institutions, but others, such as those in aging services, continue to face this challenge without relief. And even with some reduction in occurrences, malpractice insurance rates continue to rise. Most importantly, claims are tied to patient care and safety, the metric most important to those who work tirelessly to provide care during what is now the third trying year of this pandemic.

Newly published information reveals ineffective and non-existent communication as significant threats to patient safety. You might ask, “How can communication be such a problem when we work closely together, huddle, and meet often?” It’s a oversimplified example, but we all remember the childhood game of “whisper down the lane,” where the original message never matched the message received by the last person in the line.” Communication can be incomplete, misinterpreted, or flat-out incorrect. The good news is, there are ways to improve communications and subsequently improve patient safety and reduce medical malpractice claims.ECRI recently featured an article about a December 15, 2021, study in the Journal of Patient Safety that points to failures in communication as a significant contributing force to malpractice claims. This is critical information for anyone in direct or in-direct patient care, risk managers, clinical supervisors, and others. In fact, the Joint Commission identified communication failures as a leading cause of sentinel events in a Quick Safety advisory.

In a retrospective review of a random sample of malpractice claims from 2001 to 2011, in a national claims database, researchers found that communication failures were identified in 49% of claims. A communication failure between provider and provider occurred in 53% of those claims. Forty percent of communication failures involved a failed handoff, the majority of which (77%) could possibly have been avoided by using a handoff tool. The information types that were most frequently miscommunicated were:

Additionally, malpractice claims also place a significant financial burden on healthcare organizations; on average, claims involving communication failures cost 1.5 times as much as claims without communication failures, and were more than twice as likely to result in a payout of more than $1 million, the Journal of Patient Safety study noted.

ECRI’s guidance article Communication provides examples of communication breakdowns that can affect resident outcomes or safety or result in liability claims and other potential losses for continuing care organizations.