Your Smart Phone Will See You Now 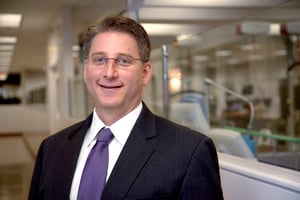 Just look back 80 years when hospital wards housed dozens of monstrous-looking devices called iron lungs. These life-saving devices treated people who were unable to breathe because of paralyzed chest muscles. Today, we don’t see hospitals with huge wards filled with iron lungs anymore. Who made that technology disappear? Certainly not the iron lung manufacturers. It wasn’t even a hardware technology innovation that changed patient care. It was a biologic—the polio vaccine—that changed the future of the hospital from treating dozens of polio cases to almost none. Who could have seen that coming?

Last week I spoke with 200 healthcare leaders in the Philadelphia region about changes in technology. I challenged them to predict the future of healthcare technology. After displaying a comical photo about robots breeding like rabbits, I asked the audience, “Are you likely to have more surgical robots in your operating room in the future or less?” You guessed it. They all said more robots. So, in effect, they were predicting the future. But were they right?

Given the rampant growth of robotic technology in all aspects of our consumer world, it’s not improbable that robots will become more widespread in healthcare. However, what’s the evidence that surgical robots work better for all procedures? That’s one question we frequently get from hospitals and health systems. Is there evidence that robotically-assisted surgery is better than traditional minimally-invasive surgery? For many procedures, the evidence is limited and inconclusive.

My first technology lesson: You can’t predict the future of technology simply by looking at the current state and linearly extrapolating forward. We advise our members to look closely at the evidence underneath the technology before adopting things. We tell them to make a plan for their entire healthcare system and think about how to roll it out.

Even up the odds

History is filled with painful reminders of failed technology innovation. Just look at a snapshot of Kodak. Sixty years ago, Kodak dominated the x-ray film market. In 1975, they were the first to invent digital photography. But they abandoned it. Why? Because their executives were convinced that “no one would ever want to look at their pictures on a television set.” Not only didn’t they see the future of photography, they simply did not move fast enough.

As noted in a New York Times piece from a few years back, “In case after case, even when senior executives know that something is wrong, they choose not to do anything about it.” Motorola, a leader in cell phones in the 90s, missed digital, too, and licensed their digital patents to Nokia. A succession of CEOS watched as Nokia took market share away from their digital phones. What then happened to Nokia? They missed the introduction of smart phones. Nokia got done to it exactly what it did to Motorola. The Apple iPhone literally changed everything.

My second technology lesson: When making technology decisions, think in a probabilistic way—not an absolute way. In most cases, it’s not just about where technology is going. It’s about the rate of change. It’s not just knowing “if” but often more important is knowing “when.”

We’re now seeing this way of thinking related to personalized medicine. There’s an explosion in the number of genetic tests being marketed to consumers and clinicians. For example, our ECRIgene™ database includes research on thousands of genetic tests currently on the market. When we dig into clinical utility and clinical validity, there’s not much in the way of substantive clinical evidence for many of them. That hasn’t slowed developers. A huge wave of genetic medicine is aimed right at us. We just don’t know quite when its impact will hit full force and upend the current clinical pathways we rely on.

Evidence-based medicine, used correctly, can drive clinical and strategic decisions that improve quality of care, patient outcomes, and safety. The trouble with clinical research is that it is often confusing and misleading. Nearly every day, a new clinical study reports the purported benefits and harms of all kinds of drugs, treatments, and products. One day you read that coffee is the key to longevity. The next day you hear coffee will kill you. It’s confusing for consumers. It’s confusing for healthcare professionals. Sometimes, it’s bad study design. Other times, it’s bad calculations. Whatever the specific cause, one should not assume that a single clinical study is definitive, except in the rarest of cases.

My third technology lesson: Be a healthy skeptic when it comes to reviewing the clinical literature. Humans are simply not wired to do certain things well such as judging probability or spotting bias. Bias frequently enters into decision making and judgment when we are unaware. And, like it or not, clinical studies may be influenced by bias and/or insufficient data to draw absolute conclusions. That’s why understanding the true evidence is key to understanding where technology is going.

One of my favorite books about understanding bias is Nudge: Improving Decisions about Health, Wealth, and Happiness, from the winner of the 2017 Nobel Prize in Economics, Richard H. Thaler, and Cass R. Sunstein. If you haven’t read it, I recommend you do so now—especially if you’re a leader in healthcare. Not only will this book help you understand how bias creeps in to so much of our daily lives, it will offer some great ideas about how making small changes in how things are aligned can lead to big changes in impact.

We, as healthcare leaders, need to understand this new world of mobile healthcare. Apps will not just influence the future of care, but will influence the direction and pathway that a patient may take to get that care. What if the apps you use to manage your health, well-being, or chronic condition take you right to a list of providers in your region? No primary care visit necessary. One click, and your personal health data is loaded into their scheduling system. “Your smart phone” will see you now, thanks to AI, global positioning, and an integrated data network. Just like the polio vaccine’s influence on yesteryear’s iron lung, smart technology may be the breath of fresh air we’ve been waiting to take.

We hope that this blog enlightens and engages you to think in new ways. Subscribe today so you will know when new articles are posted. Pick up your smart phone and tell us what you think by e-mailing us at communications@ecri.org.